I hope this time finds you on a break or wrap up from a successful, timely, and bountiful harvest.  With a little weather forced time away from the field, we took the opportunity to compile our Plains Pest Management End of Year Performance Survey ahead of the mandatory deadline this year.  Please take just a few moments to let us know how we did this year by following this link: https://agrilife.az1.qualtrics.com/SE/?SID=SV_3I8q1qiwgzfMUip

Don't worry, we are never really finished around here.  Keep an eye out for content, especially as it pertains to the sugarcane aphid as we wrap this growing season up and finalize all our research data and get our overwintering survival studies out, but it is the time of year to get our performance survey out there.

Please let us know how we did this year so we can continue to serve your needs to the best of our abilities.  The survey should remain open through Thanksgiving, but if you have a minute sooner, it would be greatly appreciated.

Today I gathered 19 DAT data from our 2015 Harvest Aid Trial.  Harvest aids and their uses in cotton have always been more art than science.  This season does seem to be shaking up our standards for expected product performance a bit.  Both from this trial and what I am seeing in the field indicates the uniqueness of the season.
My first observation is that bolls are maturing well and the majority of fields are either ready for harvest aids or are nearing it, the odd and very late fields aside.  I am not concerned, for the most part, about being able to open bolls at this time.  My second, and main observation, is that the leaves are very hard to knock off the plant this season, much more so than I have experienced.  The results of this trial point to this trend.  Straight ethephon, even at higher rates tending into the lower 40 oz. range are not dropping leaves like I would normally expect.  Even adding some of our usually very useful and popular PPOs are not returning the defoliation I have come to expect over the years, with a few exceptions (please note data below for performance and/or product exception).  I am  not noting any major issues with leaf stick, although we do have differences in this trial, the amount is too low to be a major concern.  A touch of defoliant added to solid rates of ethephon, something I have shied away from in recent years due to past performance issues, do seem to be working better and much like what I would expect from those higher rates of ethephon in most seasons.  I have not seen any one treatment that I can stamp as a one shot treatment this year, even at 21 DAT.  We often say that every season, but the stubbornness of the leaves really brings this statement to absolute fact this season.  I am also seeing issues with regrowth following the first treatment and under the recent weather pattern we have had.
So, on to the results of this trial.  This year the trial is on Mike Goss’ Farm approximately 6 ½ miles southwest of Tulia.  For this trial, we selected 7 cotton harvest aid treatments including an untreated check of interest to area producers and Ag industry.  The trial is a small plot RBD replicated 4 times.  Plots are 4 40-inch rows wide X 38-feet long.  Data collected today was % open boll, % defoliated, % green leaves still attached, % stuck leaves, and today’s data includes a 0-10 regrowth rating with 0 representing no regrowth.  At the time of treatment on September 25th, this field was only at 20 % open boll and not truly ready for a blanket harvest aid treatment but was one of the most mature in the area.  It was selected for the purpose of an early look at harvest aid performance and to be readily available for the Swisher Cotton Day on October 8th. 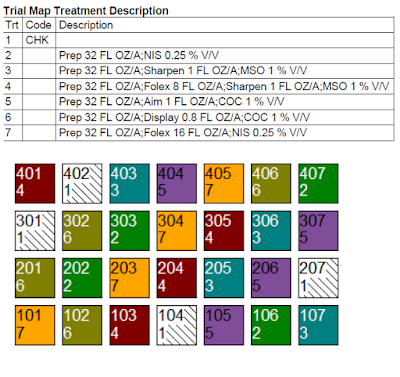 Posted by Blayne Reed at 2:27 PM No comments:

Sulfoxaflor (Transform), Federal Courts and The March of Folly - by Dr. Pat Porter


The following was released by Dr. Pat Porter, district 2 entomologist, on October 13, 2015.  It sums up the situation facing us and our sorghum production in 2016 if the labeled availability of sugarcane aphid control products remains limited for next season.  I share it here do to the dire importance of getting this message out.

Sulfoxaflor (Transform), Federal Courts and The March of Folly
Sometimes a regional decision with national implications can have dire unexpected consequences half a nation away. The Ninth Circuit Court of Appeals in California handed out a ruling in early September that EPA should withdraw the Federal registration for sulfoxaflor insecticide. The logic for the decision was that sulfoxaflor was a neonicotinoid insecticide (according to press coverage) and EPA should not have registered it without more honeybee safety studies. Indeed, EPA did ask the Registrant, Dow AgroSciences, for additional bee safety data but registered the insecticide for national use without those additional studies. (Neonicotinoids are getting some of the blame for the decline in honeybee numbers, but the science on the issue shows it is a very complicated problem and insecticides might only play a minor part. The companies that manufacture and sell neonicotioids are making enormous (and expensive) strides in limiting bee exposure when valid science says there is a real risk.)

The initial dataset submitted by Dow AgroSciences to EPA did show some sufloxaflor toxicity to bees, and that is why EPA wanted further studies. However, in spite of the fact that every press release I could find on the court decision labeled sulfoxaflor as a neonicotinoid, the truth is that it is not a neonicotinoid according to the Insecticide Resistance Action Committee (IRAC), an authority on pesticide mode of action. IRAC lists Class 4 as Nicotinic Acetylcholine Receptor (NACHR) Competitive Modulators, but the subclasses are not the same. Neonicotinoids are in Class 4A (neonicotinoids). Sulfoxaflor in Class 4C (sulfoxaflor). (http://www.irac-online.org/modes-of-action/). While sulfoxaflor and the neonicotinoids target the same site they apparently differ the way they affect the site, and that is why IRAC has them in different subclasses.

EPA, which is not known to be friendly to insecticides, explains bee safety in their  sulfoxafor registration, and note the label restrictions on using it on pollinating crops. “The EPA does not allow sulfoxaflor application to plants that are attractive to bees for three days before bloom, during bloom, or until petal fall for the majority of crops. For the remaining bee-attractive crops, we also added advisory language to the labels to notify known beekeepers of scheduled application and to apply these products in early morning or late evening. Since bees are typically only present when plants are in bloom, and the toxicity of sulfoxaflor residue is primarily a concern when the residue is freshly applied (the residue generally dissipates within three days), we expect that the application restrictions we put in place will protect bee colonies from harmful exposure.” (http://pesticides.supportportal.com/link/portal/23002/23008/Article/35618/Why-did-EPA-register-sulfoxaflor-I-heard-it-harms-bees)

By now your eyes might be glazing over, but it was necessary to establish these facts before pointing out a looming disaster that might occur if sulfoxaflor is not returned to the market for use on sorghum in 2016. The sugarcane aphid (Melanaphis sacchari) underwent some type of genetic shift a few years ago, adapted to sorghum, and has been decimating sorghum crops in the southern U.S.A. since 2013. It is fair to say this has been a crisis for sorghum growers; typical yield losses are 60 – 100% if the aphid is not controlled. This pest has rapidly expanded its range and can now be found as far north as Colorado and Illinois. The latest distribution map is here: http://txscan.blogspot.com/2015/10/new-map-17-states-and-417-counties.html .

Presently there are only two insecticides effective against sugarcane aphid; sulfoxaflor (sold as Transform) and Flupyradifurone (sold as Sivanto). Our traditional, older aphid insecticides provide only mediocre control, and in fact they kill beneficial insects that help control sugarcane aphids and this makes the aphid outbreaks even worse than if no insecticide had been applied. (These older insecticides are also extremely toxic to honeybees.)

The Federal court system has taken away one of two effective sugarcane aphid insecticides, so most people would think that since there is one left it is no big deal. But it is a big deal, and a very scary big deal. Aphids are renowned for developing resistance to insecticides. There is very little sexual reproduction (resulting in mixing of genes) in aphids and females are born pregnant and give birth to live young that are genetically identical clones of the mother. If a female has genes for resistance to an insecticide then all of her progeny will have those genes.

Sivanto is an IRAC Class 4D insecticide (Butenolide) and different from the Class 4C Transform. The foundation of insecticide resistance management has always been that if an insecticide must be used, then any additional insecticide use in the same season should be with a product with a different mode of action.  It is likely that resistance that develops to Sivanto will not protect sugarcane aphid from Transform applications, and the reverse is true as well. But now we have only one effective insecticide for sugarcane aphid, Sivanto, and it will be used on the vast majority of sorghum acres grown in the U.S. in 2016. The very best way to get resistance to an insecticide is to use it over a large area on multiple generations of a pest, and that is precisely what we are going to do with Sivanto in 2016 if Transform (sulfoxaflor) is not restored for use on sorghum.

So thanks to a Federal Court Ruling in California we now stand a very good chance of blowing out (developing resistance to) Sivanto, the sole remaining insecticide effective against sugarcane aphid and the last insecticide that makes sorghum an economically viable crop when sugarcane aphids are present. Right now, and until we get good sources of host plant resistance and/or an improbable new insecticide, all that stands between sorghum and disaster is Sivanto. I’m sure the Federal Court in California made its decision on the narrow scope of the case before it, but it is imperative that an exemption to allow sulfoxaflor to be used on sorghum in 2016 be granted. If we don’t have that exemption and Sivanto begins to fail then we will resort to the older, less effective but more bee-toxic insecticides and people will really get an idea of what bee toxicity means.

Today I gathered 12 DAT data from our 2015 Harvest Aid Trial.  This trial will be highlighted in John Villalba’s, CEA-Swisher, Swisher County Cotton Field Tour tomorrow if you would like a closer or firsthand look.  This year the trial is on Mike Goss’ Farm approximately 6 ½ miles southwest of Tulia.
For this trial, we selected 7 cotton harvest aid treatments, including an untreated check, of interest to area producers and ag industry.  The trial is a small plot RBD replicated 4 times.  Plots are 4 40-inch rows wide X 38-feet long.  Data collected today was % open boll, % defoliated, % green leaves still attached, and % stuck leaves.  At the time of treatment on September 25th, this field was only at 20 % open boll and not truly ready for a blanket harvest aid treatment but was one of the most mature in the area.  It was selected for the purpose of an early look at harvest aid performance and to be readily available for the Swisher Cotton Day on October 8th.  The AOV table, generated by ARM, by today's data should be below; 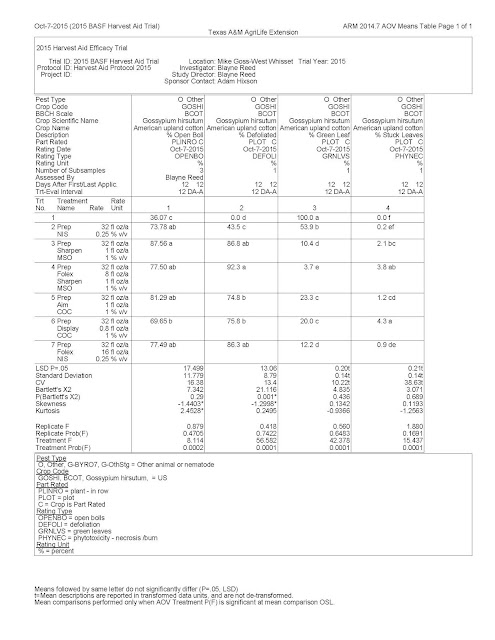 Posted by Blayne Reed at 4:31 PM No comments: