Earlier today, Dr. Pat Porter released on the Texas Sugarcane Aphid News some of our research results dealing with sugarcane aphid damage to hay.  For your convenience, we will reprint those results here.


One of the questions as we end the season is what kind of affect does sugarcane aphid damage have on the nutritional quality of sorghum stalks that are used for stover. We conducted two experiments this season, and both were designed to look at leaf damage and its affect on grain yield. However, in conducting these experiments we ended up with many plots with discreet levels of leaf damage, and The United Sorghum Checkoff Program asked us to harvest stalks from the various plots and send them for nutritional analysis.

To be clear, the results that appear below are for grain sorghum, not forage sorghum. One experiment was conducted at the Lubbock Research and Extension Center using a sugarcane aphid-susceptible hybrid grown under moderate furrow irrigation, and the other was conducted at the Helms Farm near the Halfway Experiment Station. This experiment was conducted on a sugarcane aphid resistant hybrid grown under drip irrigation that supplied relatively more water than was available at Lubbock. Data from the two trials showed very similar trends, so they were combined to generate the following charts.

The Leaf Damage Rating System developed by Blayne Reed goes from 0 to 10, with 1 being very little damage on the lower leaves, to 10 being all the leaves on the plant with observable damage. Sugarcane aphid damages lower leaves first and then moves up the plant, so a leaf damage rating of 5 would suggest the leaves in the lower 50% of the canopy are damaged.

Each dot on a graph represents at least 4 stalks harvested from a plot at a given leaf damage rating. The nutritional analyses were performed at Servi-Tech Labs in Amarillo. A sample report from Servi-Tech is here.

Figure 1. There was a highly significant decrease in Total Digestible Nutrients with increasing levels of leaf damage. 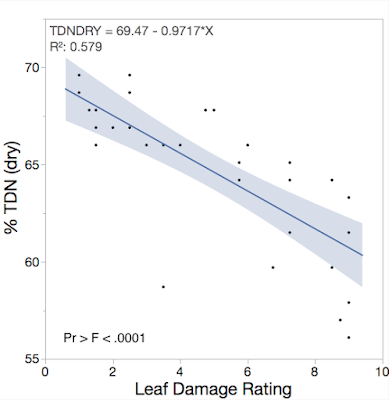 Figure 2. Crude Protein was not significantly different between plots with different levels of leaf damage. 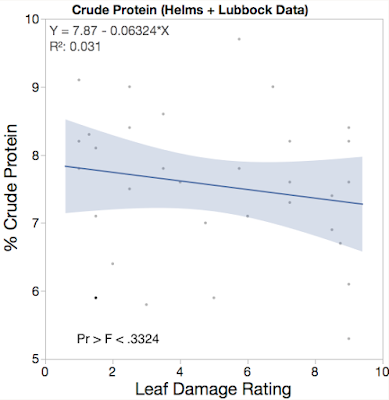 Figure 3. There was a highly significant increase in Acid Detergent Fiber (non-digestible components) with increasing levels of leaf damage. 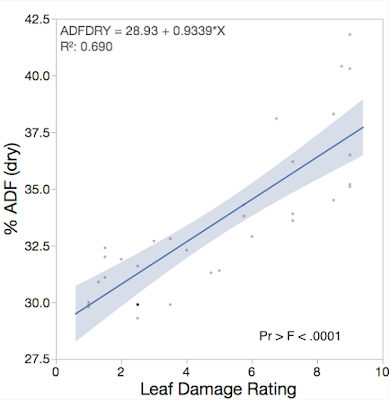 Figure 4. There was a highly significant decrease in Digestible Energy with increasing levels of leaf damage. 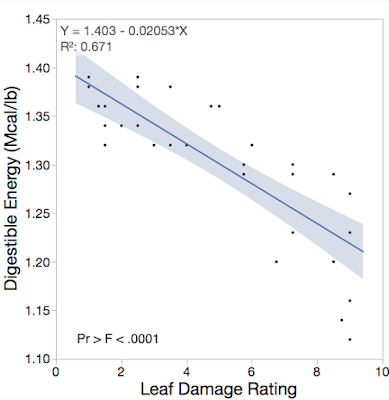 Figure 5. There was a highly significant decrease in Metabolic Energy, Beef with increasing levels of leaf damage. 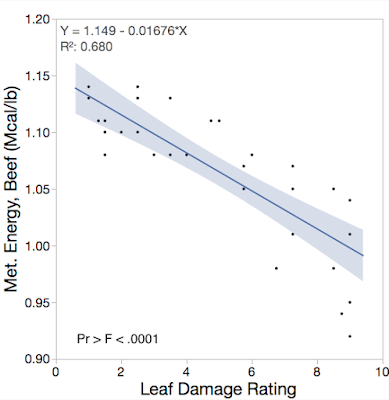 Figure 6. There was a highly significant decrease in Net Energy, Lactating with increasing levels of leaf damage. 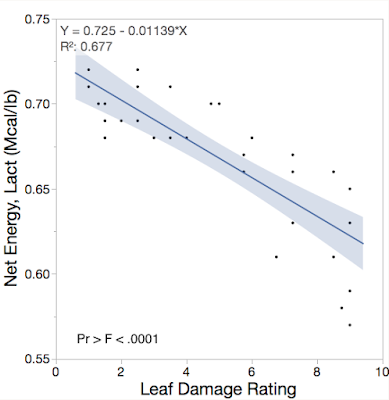 Late last week we received this information from Dr. Ken Lege, Phytogen / Dow Agronomist.  It is regarding some long awaited next step for Enlist and the Enlist Duo registrations for 2017:

Today marks an important milestone for Enlist Duo registration for use in cotton.  See the announcement below for details (I have bolded the statements with particular relevance to cotton).

A 30-day comment period from EPA opened today and will close on Dec 1.

I also found the regulations.gov site on which you can provide a comment:  https://www.regulations.gov/docket?D=EPA-HQ-OPP-2016-0594

While this is a milestone in getting the next generation of cotton herbicide technology registered and available for us to use in our serious weed control battles, we also need your voices heard during this comment period.  Without well thought out and realistically based comments from those who would be utilizing this technology, the EPA could be flying blind in its decision to move forward on the registration process.  I urge all of you to voice an organized comment during this period.

How to Scout for Cotton Harvest Aid Needs : How To Videos

Dr. Pat Porter, District 2 Entomologist, and Kerry Siders, EA-IPM Hockley, Cochran, & Lamb, shot two cotton videos to finish out our how to scout cotton series for now.  They are posted on our YouTube channel.