It remains bollworm season, and we have given the alert to scout for the unforgiving pest in cotton this week.  Here is another how to scout instalment from the Texas A&M AgriLife Extension High Plains IPM Team.  This one should be very timely.  It covers how to scout for worms, some threshold tips, and for how long the cotton will be at risk.


Late August 2016 Bollworm Threat
Hey folks, it is peak bollworm in cotton and headworm (name depending on where it is found) in sorghum season.  For the past few years we have been handling this topic with our weekly IPM newsletter, the Plains Pest Management Newsletter, and using this blog for quicker pest updates, announcements, or urban pest subjects that are not often covered through the traditional newsletter.  However, this week the bollworms are a pressing issue that needs a quick lookout update this week.  It has been a few years since that was the case in Hale, Swisher, & Floyd County.  It was not that long ago in a pre Bt and limited Bt use world that bollworms in cotton were our number one pest.  Now it looks like they are making a late play at our late sorghum and late cotton crop.
On August 8th our adult bollworm moth traps caught our ‘typical’ annual flight of bollworm moths migrating their way on to the Texas High Plains region.  We monitored this annually expected population of bollworm egg lay carefully and got the alert out to be watchful in non Bt cotton fields and headed sorghum.  Despite the notable risk to sorghum and lush and late non-Bt cotton, most of the worm egg lay went toward a large amount of late planted corn acres, just then coming to tassel stage and the worms preferred host plant, as we then expected.  In the corn the bollworms, or corn earworms as they can be referred to in that crop, are of little economic consequence as, eventually it is survival of the fittest with the worms eating each other until there is only one worm per ear.  The damage these worms do is limited to just the tip of the ear.  Because this light damage is not economic in West Texas we tend to let the worms be in corn, viewing this type of egg lay in late corn as a sink crop that is not economically impacted by their feeding.  Some of these moths did lay eggs in sorghum, also a preferred host for the bollworm over cotton and second only to corn.  Here the damage could be much more of an issue.  However, a very healthy population of beneficial insects and predators held these worms from becoming economic, almost dropping the population in sorghum below detectable levels.  With the August 15th adult bollworm moth trap catches declining, we felt that the treat had ended with minimal bollworm damage.  That is until we checked our traps this week.
Our August 22nd moth catches indicated another big round of bollworms and large bollworm egg lay for Hale, Swisher, & Floyd.  These moths were likely carried north with the recent moisture.  Having two major immigrating moth flights is uncommon but not totally unprecedented.  All economically threatened fields should be scouted thoroughly for bollworms eggs and small larva this week.  We expect many of these moths to also be drawn to corn again, thankfully acting as a sink crop.  Daily more and more corn fields mature past a point that will be attractive to the adult moths looking for acceptable host plants to lay eggs into.  This is likely to put more pressure onto headed and not matured out sorghum fields and lush non-Bt cotton not having reached absolute cut-out of 3.5 nodes above white flower yet and still having young fruit easily attacked by small bollworms. 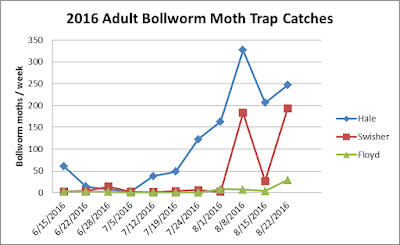 Another cause for concern over this bollworm moth flight comes as an alert from the San Angelo area, and even farther south into South Texas.  Just this last week entomologists and IPM specialists from Texas A&M AgriLife and private companies announced that they were finding populations of bollworms that had come through Bollguard II (multiple trait Bt) cotton.  While the cause of this is still under investigation it does coincide with field experiences farther down State earlier this summer.  The most important note for this region is that this large bollworm moth flight is that they are very likely to have migrated here as adults from the San Angelo region where they spent their larval forms feeding upon that area’s crops a few weeks ago.
I would suggest that all area cotton, both Bt and non, be scouted intensely for bollworms.  While the majority of these worms should be ‘sunk’ into late planted corn where they will be of no economic importance, we can make no real predictions.  Lush cotton of all types should be a very attractive and viable host for these worms as should most sorghum fields.  Due to the lateness of the 2016 crop, we do have a larger than normal percentage of fields that would fall into the lush cotton or sorghum category.

If you would like to receive the Plains Pest Management Newsletter with weekly IPM, crop, weed, crop disease status reports, and our pertinent ag research results and not just quick blog pest alerts, please visit the Hale County Extension website at http://hale.agrilife.org/ and check it out for yourself under the newsletter – IPM tab.  If you wish to become a subscriber to the newsletter and receive a PDF version in your email every week during the summer growing season, contact either myself or Audrey through the website and we will get you added to our subscriber list.
Blayne
Posted by Blayne Reed at 5:57 PM No comments:

Just a quick heads up about a Progressive Growers Breakfast at 8:00 AM at Jeff's in Kress.  Come see us, get a cup of some awesome coffee, and ask some crop questions that have been on your mind about your fields.  We will give a quick crop report, and then expected topics should include when to shut irrigations off for cotton and corn, and a sugarcane aphid update for sorghum and hay crops.  We should be out and done around 9:00 AM and about our day then!

Hope to see you there,


Blayne
Posted by Blayne Reed at 2:15 PM No comments:

Lots of things to look for in sorghum right now!  Here are some more how-to-scout videos the IPM team here on the Texas High Plains have produced this week.

And the head pest video is here:


Blayne Reed
Posted by Blayne Reed at 3:16 PM No comments: