Nicole's Bug of the Week - A Brief on Edible Insects

This entry for bug of the week is an interesting one.  Enjoy!

This week’s article is another combo deal, so if you liked the two-for-one of the last bug of the week entry, you’re going to love this. By popular demand, this article will be covering several kinds of edible bugs. While the concept of eating bugs might seem pretty gross, the practice (known as entomophagy) is nothing out of the usual for about 2 billion people worldwide, not to mention that in some regions certain bugs are seen as delicacies.

If you’ve got a yard, there are probably bugs in it that you can eat, just so long as you are sure to cook them well beforehand as most bugs will carry nematodes and parasites that can be harmful to you. The three most common bugs that are native to North America are going to be ants, crickets, and grasshoppers (that’s right, that weird kid that used to sit on the playground eating the ants was actually way ahead of you.). Crickets and ants can be gathered, roasted, and eaten as you please, but you might want to be a little more wary of the grasshoppers as some, like the eastern lubber grasshopper common to Texas, can make you sick. Locusts on the other hand are quite safe to eat and commonly served roasted on skewers.

However, if your stomach won’t abide the idea of eating some bugs you just found on the ground, the good news is that there’s a lot of food made of bugs that doesn’t look or taste like it’s made of bugs. For example, the company Chirps has six flavors of cricket chips as well as cookie mix made with cricket flour. Look around a bit and you can find protein bars, candy bars, and even jerky made out of crickets. If you’re feeling a little braver you can find dried crickets in flavors ranging from BBQ sauce to mango, toffee coconut, and surprisingly, pumpkin spice.

So the good news is that if you really want to eat some bugs, not only can you, but it’s pretty easy. Not to mention that most bugs are high in iron, B12, and pack a lot of protein as well as coming naturally in a variety of flavors. So who knows? Maybe sometime soon you’ll be reaching for a bag of sea salt and vinegar crickets instead of potato chips or sprinkling some sugared black ants on top of your favorite dessert. It couldn’t hurt to try, right?

Blayne
Posted by Blayne Reed at 2:48 PM No comments:

Posted by Blayne Reed at 2:44 PM No comments:


Nikolas Clarkson is a returning intern for us at the Hale, Swisher, and Floyd IPM Unit with Texas A&M AgriLife.  Nik is a senior at Texas Tech nearing the end of his collegiate career.  Part of Nik’s duties are to write and help educate in an applied way on some of the subjects he is learning about with us this summer.  Here is Nik’s write up on Bt resistance in the bollworm population and what we might be expecting from the worms as they move into more cotton fields this August.

Nikolas Clarkson’s Bollworm Bt Resistance and Status August 2018
It has been an interesting summer this year in West Texas with our cotton growing season. We are at that point of the growing season where we have fought through drought, plant growth, weeds, and pest issues and are inching our way toward the finish line. However, we still have a couple more hurdles to climb before we reach that sweet harvest date. One of those hurdles is the cotton bollworm and now is the time to prepare for their full on arrival.
As people in the cotton industry in West Texas we need to understand the importance of the bollworm and their relationship with cotton. The bollworm has been known since around 1796 and has been a pest in cotton ever since. The states that see the bollworm the most are Texas, Louisiana, Mississippi, Oklahoma, and Arkansas. The bollworm is a pest that doesn’t just attack cotton either most people can find them in corn known as corn earworms and you can find them in sorghum, soybeans, and peanuts as well but our focus is on cotton. The bollworm has 4 stages in its life cycle which are the egg, larva, pupa, and the adult moth. The cotton bollworm hatches out of its egg about 3 days after being laid in the hot West Texas weather, so this gives us a short period of time before they turn into larva and start destroying bolls. The cotton bollworm can be detrimental to a cotton field in a hurry if we do not catch them in time. They can also be very hard to control once they have entered the bolls so trying to catch them before that threshold point is important.
We’ve been lucky through the years with Bt, but we are seeing resistance of the cotton bollworm in these technologies. The cotton bollworm resistance is getting worse with last year being the worst year so we need to be knowledgeable about cotton bollworm resistance in Bt varieties moving into the bollworm season this year. In an article by Steve Byrns of Texas A&M Agrilife Communications he caught up with Dr. David Kerns who is the Texas A&M Agrilife Extension entomologist and IPM coordinator for the state of Texas. Dr. Kerns and his colleagues worked on a project and collected data on 2016-2017 and was quoted stating that bollworm populations were showing “high resistance to the Cry1Ac technology and about 70-75 percent of these populations showing resistance to the Cry2 toxins.”
There was also some resistance seen in Cry1F. This can be worrisome for us because this means our second generation Bt technologies are seeing quite a bit of resistance. This means for producers with Bollgard II, WideStrike, and TwinLink just need to be aware for any bollworm resistance as these are made up of the Cry1 and Cry2 toxins. For now it seems that if we have third generation technologies planted we should be okay, but we should still be cautious. WideStrike 3, Bollgard 3, and TwinLink Plus have Vip3A toxin which Dr. Kerns says is still “pretty new, so it has not been grown extensively.”
Burns also mentions during the interview that Dr. Kerns says “that they haven’t found resistance to Vip technology yet but that it is expressed better in corn than cotton. When cotton is stressed it may not express enough of the Vip3A to provide desired control.” So as consultants, researchers, and producers we just need to be aware that we can possibly still suffer damage and need to be able to find these worms knowing they are out there.
Now that cotton bollworms are vying to reestablish themselves as the number one cotton pest and are becoming increasingly resistant to Bt varieties we need to make sure that we are properly trained on how to scout for them in the field. We are coming up on the date of August 20th which every year is our most important week of scouting because that is when we tend to see a huge wave of bollworms coming in.
For us working in the Hale, Swisher, & Floyd IPM Unit, Blayne is very particular about our field scouting methods. First, we get out across the field.  For each data set, we start with whole plant inspections, scouting for the eggs and larvae on 2 plants.  We usually get about 5 separate data sets for 10 whole plants inspected total, but this varies on field size. Next we make use of a drop cloth that allows us to either check 4.5 or 6.4 row feet depending on row spacing and literally pop off all insects from the dozen or so plants in that area under the cloth. This allows us not to check 100 plants and get an average for a field with 4 or 5 drop cloths. We bang the plants on the drop cloth hard enough and see what falls out. Sometimes you will find the worm straight up on your drop cloth, other times a small boll will fall off and the worm will be burrowed in the hole it has created, or you can find the small worms in bloom tags that have fell on the drop cloth as well. It is also important to pick up dropped squares and bloom tags in the area to see if you find bollworm damage or the worm itself. For the plant inspections, the bollworm can be found anywhere but usually lower on the plant and around bolls and squares. When inspecting it is easy to either see the worm boring into or out of the boll or finding the hole and feeling that the boll is not strong and firm but soft and squishy.  Don’t forget to check under the plants for worms that have fallen with damaged fruit.  These worms will crawl back onto plants to attack more fruit quickly. 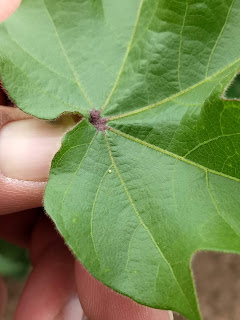 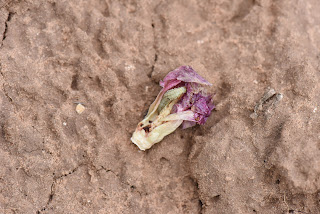 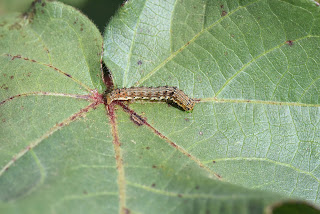 A bollworm egg will be colored white as a pearl, perfectly round and dome-shaped like a ball, and are ribbed all the way around. They are very small and can be easy to miss because they are just a little bit smaller than a pin head. Usually you are supposed to find and eggs laying on one of the top of the uppermost leaves of the plant, but they can be found anywhere from bolls, squares, bloom tags that haven’t fell off yet, or even on the stem of the plant. When we scout for the worms themselves we need to know how to identify them by their anatomy, size, and color. The cotton bollworm has 5 pairs of prolegs, 3 pairs of slender legs behind the head, and under a magnifier the skin looks rough and spiky. Their color can range from a light-dark green to a pinkish and brownish nearly black color. We classify the bollworm into 3 different stages which are small medium and large. The first 3 days the worm is considered small and goes from 1/16” to ¼” in that time.  The worm right out of the egg is easy to miss because it’s so small so it is important to have a magnifier. The worm is then classified as medium in days 5-8 at ½” to 7/8” tall. Then days 10-12 the worm is 1 1/8” to full grown at 1 3/8” tall.
If we come to a point where we unfortunately have to spray for bollworms it is critical to know what we can spray and how much it costs. Chemistry and market depending, it can cost between $6.80 and $38.00 per acre for bollworm control products.  Some currently work better than others, while some protect beneficial arthropods and others are broad spectrum.  There can be many decisions going into which product you might need. Here is a short list of chemicals and rates for the cotton bollworm provided by the Texas A&M Agrilife Extension Cotton Insect Management Guide that can help you decide: https://cottonbugs.tamu.edu/fruit-feeding-pests/bollworm-and-tobacco-budworm/