Field Scout School set for May 31st in Plainview

Blayne Reed, EA – IPM Hale, Swisher, and Floyd, Dr. Suhas Vyavhare, District Cotton Entomologist, and John David Gonzolez, EA – IPM Palmer, Bailey, Castro, invite you and your colleges to a Field Scout School on Thursday, May 31, 2018. The free training will be from 8:45 A.M. to around 12:30 P.M. in Plainview at the Ollie Liner Center (2000 S. Columbia, Plainview, TX, 79072). Three CEU’s are being offered, two IPM and one drift management. Coffee, snacks, and drinks will be available thanks to our sponsors GOWAN, Plains Land Bank, and the Hale County Ag Committee but lunch will not be provided.


This training is intended as a first time introduction or a seasonal review of the proper procedures involved in reliably field scouting and identifying potential issues in cotton, corn, and sorghum for insect, weed, and disease problems.  This training should be ideal for all summer field scouts working for independent crop consultants or AgriLife Units, company interns, progressive and field precision minded ag producers, proactive county agents, early career ag professionals, ag professionals involved with field crop sales, or anyone interested in identifying problems in our area ag production fields.


Following the conclusion of the scout school around 12:30 P.M., a WPS (Workers Protection Standard) Training will be provided for anyone interested or needing their worker or handler safety training now mandated annually by the EPA. 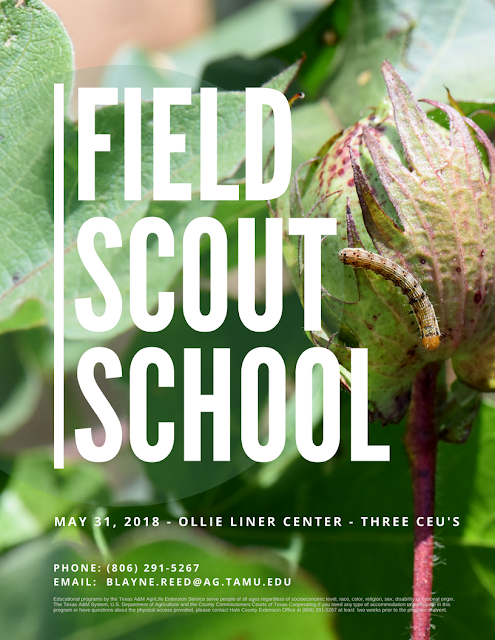 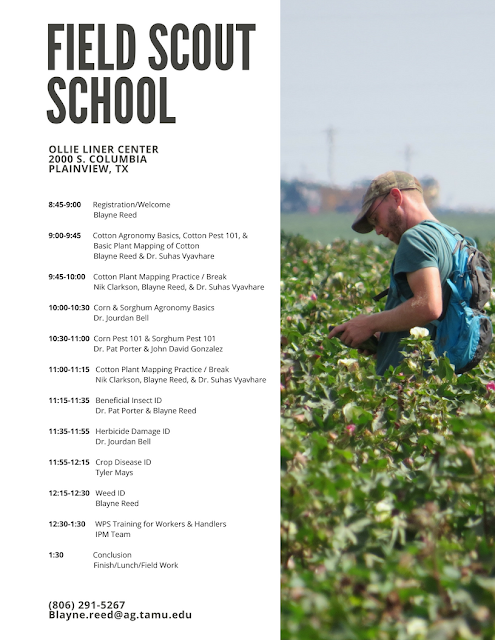 Posted by Blayne Reed at 8:29 AM No comments:

Wireworms Notable in the Area and a Threat to Cotton Establishment

Wireworms Notable in the Area

After being alerted to some potential heavy wireworm populations in the area by Dr. Pat Porter, District Entomologist, I have been making rounds behind the planter in some of the area’s earliest planted cotton fields.  What I am finding is troubling.  The population of wireworms, or rather the amount of their resulting feeding damage on yet to emerge seedings, I am finding indicates a very high threat level to cotton stand establishment.  High enough that I feel wireworms could be one more establishment issue we have to address with prevention in each and every cotton field in the area.
Thus far, cotton planting conditions here in West Texas are far from ideal.  It is desperately dry, most days windy, the soil temperatures are following the air temperature closely (with tantalizing highs and seedling jolting lows) with scorching temperatures predicted and little to no rain in the forecast, and irrigation equipment and capabilities that have seen better days.  Adding to these problems look to be these wireworms.
Wireworms do not like cotton and it is not a preferred host.  They will however attack cotton after germination and before emergence as a survival method, often as a last resort to save off starvation.  When we review the literature, we find a list of circumstances where wireworms could be a problem for seedling cotton.
- Following a grain, forage, or hay crop.
- In a dry season following a wet year.
- In a field with a heavy cover crop or heavy fall or spring weed pressure.

The damage from wireworms to cotton seedlings can be two-fold.  First, is the direct damage from their feeding.  If the feeding occurs on the cotyledons only the damage is usually minimal.  It takes an experienced eye to even spot this type of damage.  If the feeding occurs along the tap root it could be substantial causing developmental delays for that plant taking weeks to recover from, and if heavy enough, eventually fatal.  If the feeding occurs at the apical meristem (growing point found between the two cotyledons) or the curve just below the cotyledons, it is almost always fatal for that plant.  There is a substantial amount of secondary damage that is normally associated with wireworm feeding on the taproot of cotton seedlings.  The wounds caused by the feeding open gapping wounds allowing seedling diseases to impact young plants at a level I would estimate to be near ten-fold. 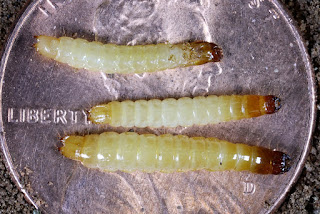 The conditions we are experiencing today fall in line with a heavy wireworm “storm.”  Last September, rain and cool temperatures were widespread.  The resulting weeds and/or vegetative growth were abundant.  And we had something of an open fall, allowing plenty of time for that excess vegetation to grow off, not wanting to stop for winter.  Wireworms, the larval form of click beetles and an array of false wireworm species, flourish in high vegetative situations.  Now we are much drier and wireworm food sources are reduced.  They become reduced even more with field preparation and cleaning/clearing of green vegetation.  Now, heavy wireworm population is hungry and desperate for a food source.  If this population is high enough, it alone has enough potential to devastate cotton seedlings before stand emergence.  A moderate population will reduce cotton stands.  If this moderate population of wireworms is aided by other factors (i.e. drought, seedling disease, high winds, night or irrigation cooled soil temperatures, etc.) we could also see failure to establish stands.
How do we address this issue?  First let me state that, once wireworm problems are found at a level that are interfering with stand establishment, the only control option is a replant.  No over the top application has ever been proven effective in controlling the problem.  While it is difficult and costly to move treatments below the soil surface, the failures in achieving control are probably because the damage to the seedlings are irreversible.  It should also be stated that, even at their worst, predicting which fields wireworms will be an issue is impossible, and thus preventative over the top or chemigation type treatments have never been justified for any particular field and remain untried or unproven.  Even the best wireworm sampling methods only give a positive or negative indication of presence and are not a population estimating tool.
So, we are left with what we can do for field preparation and at planting.  Research trials have shown that insecticidal seed treatments such as Cruiser, Gaucho / Poncho / Honcho can offer 60%-75% control of wireworms.  Meanwhile, other insecticidal seed treatments such as Orthene offer no or limited protection.  If a higher level of control is justified in any particular field, there are an assortment of labeled insecticidal seed box treatments for wireworms that can offer 90%-99% control but come with difficulties in dealing with vacuum planters.  In addition to chemical control options, fields with fewer hindrances to stand establishment will establish cotton stands faster and leave a shorter window for wireworm damage to accumulate.  Once cotton stand establishment is achieved, wireworms should no longer be an issue for cotton.
I strongly suggest digging in seedbeds and checking germinated cotton seedlings 4-10 days behind planting for wireworm damage.  If issues exist in your field or fields, replant and actions are much better sooner rather than later.  If issues are indeed persistent for the majority of your already planted fields, preventative actions should be taken before any additional plantings are made.

Posted by Blayne Reed at 3:12 PM No comments:

Over the past few days I have received phone calls about swarms of honey bees in and around the Plainview area.  I would like to put several minds at ease and reassure anyone witnessing these swarms that this is not an uncommon occurrence, especially given the amount of wild bees we have developing in our area.  More importantly, they are not overly dangerous while they do still warrant a level of respect.  It is currently open for debate as to why honey bees are seeming to thrive here in West Texas recently, but we should shelve that and get to the answers as to what is happening here?

I am going to reference a previous blog on this site dated March 8, 2017 and titled "Swarming Honeybees in West Texas."  That was information shared by Dr. Charles Allen, Associate Department Head of the Entomology Department at Texas A&M, with us.  If you would like to view or revisit this full article which includes a link to a video by Dr. Allen, I encourage you to do so here:

Here is a down and dirty need to know fact list about these swarms.

1.             1)  Honey bees swarm because they are moving.  They have scouts out looking for a suitable location to make a new hive.  This might be near a reliable water source, food source, shelter, absence of bee parasites or disease, etc. and will be moving on soon, usually within 24 hours.

2.             2)  Honey bee swarms are not ‘dangerous.’  Honey bees are aggressive when defending their young and their hive where they are raising their young.  Swarming bees have no hive or young to defend and will be as ‘docile’ as honey bees ever are.  In this situation, these bees just want to find a new home and will let issues slide that would normally provoke a response to an attacked hive.

3.             3)  95% to 99.9% of the wild honey bees in West Texas are Africanized.  These so called ‘killer’ bees are simply more aggressive than their calmer cousins.  These swarms of moving bees might not be more docile, but they should be respected.   Children, pets, and others need to be mindful of the bee swarm and give them some space so the bees are not unintentionally provoked.  They will move on shortly.

4.           4)  It might be advantageous to do whatever is possible to make your home, barn, or area unattractive to honey bees if you do not want to share your space with them.  For example; a quick double check to make sure the attic, access to under a house, or abandoned well nearby are sealed tightly and can restrict bee access or any leaky faucet cannot be viewed as a reliable water source.  Checking for and quickly solving these or other similar factors could help the bees decide not to build their next hive on your property or in a dangerous to you location.  If you have noted a bee swarm is nearby and blooming plants or fruit trees in the area, you might want to hurry.

5.           5) If the bees need to be removed, I urge you to call professionals to deal with the bees, especially if a hive gets established on your property.  These Africanized bees will be very aggressive while regular honey bees are aggressive enough.  If you are determined to have dealings with a honey bee swarm that stays longer than 24 hours or an existing hive, I urge you to only do so with the proper equipment and only on a cool, dark night when bees cannot orient themselves well and will be moving slowly.

Posted by Blayne Reed at 3:29 PM No comments:

Posted by Blayne Reed at 1:24 PM No comments: