It is no secret that weeds have been the problem of note that local producers have been focusing control efforts upon during recent growing seasons, particularly in cotton.  That made it all the more perplexing for producers when the bollworm and a few other pests returned in force this year adding to economic inputs and impacts to our local cotton and other crops this growing season.  All and all, the bollworm menace was dealt with by entomologists and producers pretty well locally and the majority our crops look to have come through the issues with at least a solid harvest still ongoing.  However, the intensity of the bollworm pressure and the need to treat several types of Bt cotton along with the majority of non-Bt cotton fields has brought up many questions about the nature of the 2017 bollworms.  Bollworms had been largely absent as an economic concern for several growing seasons and no one regionally had many issues with any type of Bt for bollworm control in many seasons.  So, what was different about these worms?  Were they the dreaded Helicoverpa armigera, the old-world bollworm (our native bollworm is Helicoverpa zea), that entomologist have been warning us is much worse and might show from abroad any day?

In planning for and attempting to monitor the arrival of the old-world bollworm and a few other moth pest species, the local Texas A&M AgriLife IPM Unit was proud to be one partner of many for a 2017 USDA moth trapping survey.  This trial, along with several others conducted by the Hale, Swisher, & Floyd IPM Unit, was conducted to help answer these questions.  This survey had five trapping locations over the three-county area and was but one piece of a larger State-wide survey within a National moth survey.  Helicoverpa armigera was but one of five invasive moth pests trapped for.  The other four were the pink bollworm, European corn borer, Egyptian cottonworm, and the American cutworm.  Moth traps were set with two in Swisher County, one in northwestern Floyd County, and two in Hale County.  Trapping began on August 1st and continued weekly through September 21st, completely encompassing peak typical flight patterns for the area. 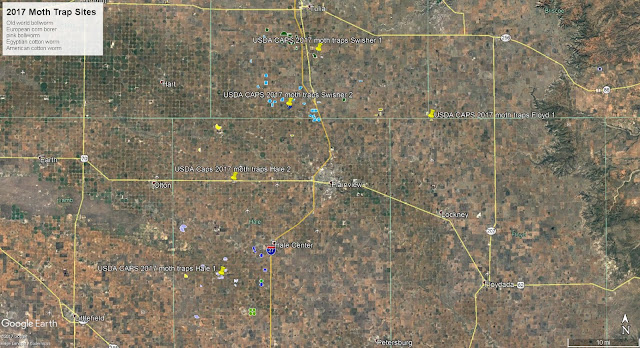 There were 427 potential invasive moths trapped on designed pheromone lures total in 2017.  All captured moths were first checked at the IPM Unit’s laboratory in Plainview for preliminary identification.  From Plainview there were 46 possible positive invasive moths forwarded on to the Texas A&M AgriLife Extension Insect Identification Lab in College Station.  With Helicoverpa armigera and Helicoverpa zea only visual difference coming through detailed dissection and with the only working lure still attracting some zea moths there were a lot of moths to methodically sort through.  Of the moths sent for identification through dissection or closer analysis 42 of the 46 potential moths were old-world bollworm candidates.  Of the 42 old-world bollworm candidates, 0 were Helicoverpa armigera.
This means that our 2017 bollworm issues all came from Helicoverpa zea, the native bollworm.  While the results of the survey both State-wide and Nationally are still being compiled.  This is good news locally in that the old-world bollworm, and the added control difficulties it will bring with it, are not here yet.  This is bad news in that our native bollworms are getting tougher to kill and it means we are still on the lookout for the dreaded Helicoverpa armigera and ponder just how bad will they be?

What this study found and what we witnessed in the field confirms what entomologists from across the cotton belt where bollworms are an annual pest problem have been sharing with us.  Worms are coming through Bt and older applied insecticides such as pyrethroids at a more regular pace.  Locally, where we do not see economic issues with the bollworm annually and rely on moth migrations from other areas for our flush of bollworm activity, will we see issues in 2018 and beyond?

Much of the answer to that question is unknown.  Much of our local ‘annual’ bollworm population is a result of unpredictable migration patterns that might not become clear until the last moment.  It is possible that the bollworm migration will not be as severe as 2017 on any given year.  It is also possible that if the moth arrives again in force that the ag economics of the region will support more grain crops.  If we have more grain crops in the area, bollworms would tend to favor those crops instead with the grain acting as a more preferred sink crop for bollworms where they are of limited economic impact and avoid the less preferred host cotton.


We do know that in areas across the cotton belt where bollworms are an annual issue, alternate and improved IPM control plans are going into place with more regularity, and with some added control costs.  There will be an increased use of the latest and multi-trait Bt and more use of newer and more bollworm effective insecticides.  These actions should help mitigate bollworm control issues and likely should be considered locally also.  There has begun a beltwide revisiting of the value of accurate weekly field scouting across the belt to bring the best and most timely information to producers to prevent all pests from getting out of hand.  With all factors working together, control measures should remain economical and prevent unneeded, unexpected, and disastrous loss to crop and income.
The only other fact we can be certain of for next year, weeds might not be the only major factor of control producers consider next year when selecting varieties and crops.

Posted by Blayne Reed at 4:41 PM No comments: