Posted by Blayne Reed at 2:48 PM No comments:

What is up with all the corn earworms in Bt Corn, what will happen in cotton?

The following was written for FOCUS yesterday.  It is a good update on the bollworm situation as we stand in late July 2018.

What's Up With All the Corn Earworms in Bt Corn?

There are large numbers of corn earworm larvae in Bt corn ears in the Texas Panhandle, and some people are spraying in an attempt to control them.

The first question we are getting is what to spray, but the better question would be whether to spray. Corn earworm is usually an ear tip feeder, and on its own is seldom an economic pest of corn. However, this year we are seeing earworms doing more than just tip damage, and feeding lower in the ear. The reason(s) for this change in behavior are unknown.

We have not forgotten last year though, when there was good evidence that just a little ear tip damage resulted in higher fumonisin levels. This could happen again this year, especially if the weather in August and September turns off wet and relatively cool. However, based on what we saw last year, the little bit of tip damage needed to promote fumonisin has already been done this year, so the contribution of ear damage to in-season fumonisin levels will depend largely on the weather between now and harvest.

Corn earworm eggs are laid on silks, and the small larvae feed on silks as they move toward the tip of the ear. Silks continue to grow for several days, so new growth will not have insecticide residue on it. That is in part why sweet corn growers often spray on a three-day schedule. Once inside an ear the larvae cannot be reached with insecticides. They only leave the ear when fully grown as they move toward the soil surface to tunnel in for pupation, but by this time all of the damage is done. And these fully mature larvae don’t feed much, so they won’t get an insecticide dose except by direct contact.
There is very little benefit to trying to kill them while they are in the ear and after they finish doing damage. Corn earworm control for next year is not like western corn rootworm control. Western corn rootworm has one generation per year, and the beetles emerging in a field tend to stay in that field to lay eggs in the soil. The theory of spraying rootworm adults to control next year’s root feeding is that if most of the beetles can be killed before they lay eggs, the number of rootworm larvae the next year will be reduced. Corn earworm, however, is highly mobile has several generations, and multiple hosts to develop on. The immigrant moths come up from the south in spring and early summer, and immigration continues throughout the summer as locally reproducing populations increase as well.  Killing larvae as they leave the ear will have no effect on next year’s population. It might slightly reduce the number of moths in the next generation this year that will lay eggs in cotton (see below), but only slightly, and at significant expense.

Western bean cutworm complicates things, but its management should follow established procedures and guidelines presented on page 17 here. Western bean cutworm has been shown to be resistant to Cry1F, the only older Bt toxin that provided any significant control or suppression. Cry1F Bt corn should be scouted and treated as if it was non-Bt corn.

The second question we are getting is why all of the earworms? One answer would be that they have become resistant to most of the toxins in Bt corn. Dr. David Kerns, IPM Coordinator at College Station, has been running resistance assays on field collected populations of corn earworm (cotton bollworm) collected in central Texas and has reported significant levels of resistance to the once-partially-effective toxins Cry1Ab and Cry2Ab2. Cry1F never was very effective, and Cry1A.105 is a synthesized version of these toxins.
The bollworm/earworm populations we have on the High Plains are comprised largely of moths that flew in from south and central Texas, so it would be no surprise to find they carry alleles (genes) for resistance to the older Bt toxins. Dr. Ed Bynum, Extension Entomologist in Amarillo, will collect larvae from a Bt corn field with high numbers of larvae in the ears tomorrow, and send these to Dr. Kerns for laboratory screening for resistance. John David Gonzales, Extension Agent IPM in Parmer, Bailey and Lamb counties, sent a collection of 250 larvae from a Bt problem field to Dr. Kerns this week. The laboratory screening will take a couple of months to complete and the findings will be reported here.

The third question we are being asked is what does this mean for Bt cotton which shares many of the same or similar toxins found in Bt corn.The answer is that we don’t know for sure, but we can pose a couple of scenarios. As most people have heard, bollworms (corn earworms) did significant damage to Bt cotton last year in central Texas and in the mid-South, and they are doing it again this year. Dr. Kerns assayed last year’s bollworms and found a significant level of resistance, and we can assume that same level or a higher level is present this year.

Corn earworm (cotton bollworm) greatly prefers to lay eggs in corn rather than cotton or sorghum. When given the choice between only cotton and sorghum, it tends to prefer sorghum more. But we have relatively little sorghum in the system this year. In areas where the corn planting is spread out over time, moths emerging from earlier planted corn will seek to lay their eggs in later planted corn that is silking or somewhat past green silk. This scenario played out last year on the High Plains, and the later corn intercepted a lot of the egg laying that would otherwise have gone to cotton if the later corn was not around.

However, where much of the local corn crop is planted relatively early, there may not be later corn and sorghum available to draw the moths away from cotton. It is certainly possible in this situation that the moths emerging from corn will lay a high percentage of their eggs in cotton. If there is resistance to the Bt toxins in corn, the resulting larvae will be resistant to most of the Bt toxins in cotton.

The one Bt toxin that is still highly effective on corn earworm (cotton bollworm) and western bean cutworm is Vip3a. Corn with Vip3a will not produce many moths at all, and cotton with Vip3a will not have much damage. The “Handy Bt Trait Table for US Corn Production” makes it simple to determine the Bt toxins in any commercialized corn.

Blayne Reed
Posted by Blayne Reed at 9:52 AM No comments:

Nicole’s bug of the week – The White Lined Sphinx Moth

Nicole’s bug of the week – The White Lined Sphinx Moth
This week’s Bug of the Week is one that we were getting reports and questions about from the Tulia area this year but are actually an annual curiosity for all but usually after causing some panic for gardeners and producers.  The white-lined sphinx moth, also known as the hummingbird or hawk moth. Sphinx moths are found throughout North America but many more are native to tropical climes. There are over a thousand types of sphinx moth worldwide and 125 in North America alone. The moth gets its name from its caterpillar, which will rise into a “sphinxlike” pose if disturbed. These caterpillars can and do grow to be quite large, up to four inches long, which is pretty impressive, but the adult moths might be even more so.  Some species of adult sph6inx moths can have a wingspan of up to eight inches while the white lined sphinx moth, our native sphinx, has a wingspan of about 3-4 inches.  These moths are so humming bird like, they are even sometimes mistaken for humming birds. 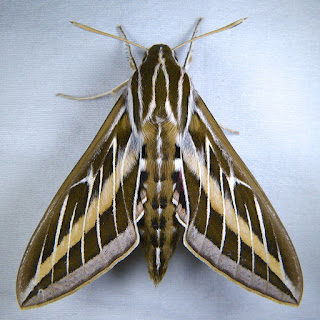 The caterpillars of the white lined sphinx are a type of hornworm so called for the small horns the sprout from their rear ends, which are impressive in their own right.  Don’t worry, those horns on our local worms are not too hard or poisonous but caution is strongly suggested as many horned insects do pack a poisonous horn or bristle of some sort.  Coloration of the white lined sphinx caterpillar varies some, but caterpillars are typically a vibrant green with bold yellow, black, and white stripes running down their sides. 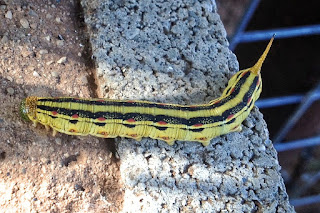 The sphinx’s life cycle is fairly typical for a moth. In spring or summer, the female of the species will lay as many as one thousand eggs on the plants that the larva will eat. In 2 to 3 days, the eggs hatch into caterpillars and begin to feed. In about eight weeks the caterpillar will be full grown and will burrow underground. If the region has a sufficiently cold winter, much like the Texas High Plains, the caterpillar will overwinter underground limiting the local population to one generation per year.  In the spring they will emerge as an adult sphinx moth typically to fly at sunrise and sunset, drink the nectar of flowers, and reproduce until winter. 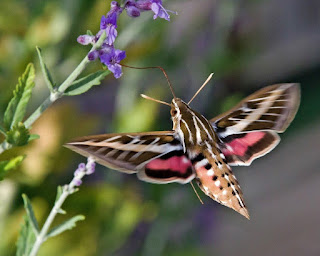 In many years the annual arrival of the caterpillars causes quite a stir, most recently in 2014 where there were an abnormally large amount moving across fields, farms, and pastures from Kansas to Lamesa.  The larva tends to hatch about the same time and move across the countryside in vast numbers, sometimes numbering in the millions.  This can be quite stressful to watch as they move across cotton, sorghum, or vegetables.  As of this date, they have never caused any economic problems as they are very picky eaters.  The larva only feast on purslane weeds locally, almost completely ignoring other plants and healthy foliage nearby.  Their listed diet can consist of variety of plants which include portulaca, primrose, wild grapes, and a few types of succulent trees.

Posted by Blayne Reed at 3:54 PM No comments: