Just in case you have not been outside this year, the mosquitoes have been pretty thick through Hale, Swisher, & Floyd due to our record breaking rains.  I can say from experience that the pressure we all have experienced in our towns, yards, and fields from these mosquitoes has been just about equal to deep inside a corn field every summer day… it has been that intense (don’t ask me what the corn fields have been like this month).  So, on a 0 to 10 scale, the mosquito pressure has been a 10 or higher everywhere.  Just as that initial population seems to be subsiding, it looks like we should be preparing for mosquito round 2 following additional rainfall.  Now we know they would be returning again soon.  The question of when they would be hitting their stride again lingers out there for most of us but we know they are due day by day.  I snapped the below photo on June 16, 2015 with my phone on a long trek back to my pickup around muddy roads and standing water after scouting a cotton field just southwest of Hale Center.  The photo quality is better than I expected so I will share it here for effect.  It is from a turn-row rut between cotton and CRP that was standing in 4-inches of water for about 50 yards in length.  Ignore the reflection of the clouds and focus on the dark mass in the center of the water that reaches up into the grass and weeds at the top of the photo.  That is a ‘swarm’ of wigglers or mosquito larva.  That mass could number in the hundreds of thousands if not millions.  I counted 14 such masses in that 1 rutted stretch of standing rainwater.  Any long standing water should be similar. 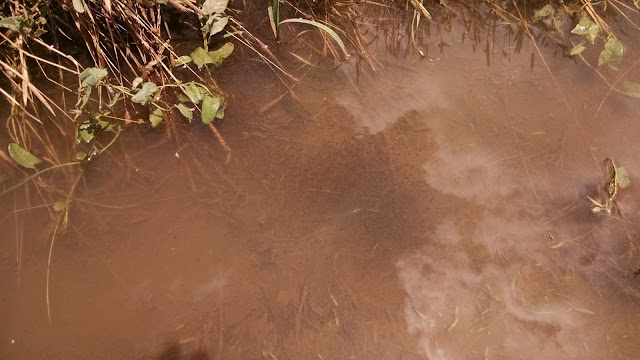 By my estimation of these larvae’s age, should put them emerging as adults around June 18 or 19 and ready for a blood meal a few days after that.  This gives us a few more good days to employment our IPM control strategies for mosquito control, or Integrated Mosquito Management (IMM) if you prefer.
Almost all of our IMM strategies are preventative in nature and involve either restricting mosquito larva from completing their wiggler stages in water via restriction, biological, or water treatment.  I suggest taking what actions in and around your area today before the mosquitoes carry you off later.  After these mosquitoes emerge as adults, it will be too late and our control measures at that time are limited in scope and possibly affect.  Taking such actions as filling or draining water holding ruts or potholes, dumping out objects that catch and hold water such as tires or upturned toys in the back yard, sealing up rainwater catching systems tightly, changing your dog or cat’s outdoor water, and making use of biologics such as predatory fish in stock tanks or tail-water pits can significantly lower the amount of mosquitoes that make it to adulthood within your area.  For larger bodies of water, such as lakes or creeks, we do have labeled options to treat for these wigglers that do not endanger the rest of the ecosystem if practical for your to do so.
Good Luck in your renewed IMM efforts and I hope you can get those mosquito numbers down and with it the diseases that they could be transmitting to humans and livestock alike!  For a full rundown on mosquito IMM, please check out the May, 2013 article on this blog titled “Controlling Mosquitoes.”